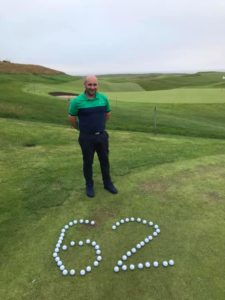 Sanderson’s eight-under-par effort came in the second round of the Brora 5 Day Open, with his effort one below the existing course record, set last year by head greenkeeper James MacBeath.

The plus one handicapper went to the turn in a superb 29 strokes, six under par, after a fast start which featured birdies at the 1st, 2nd, 4th and 6th, before a stunning eagle at the par-5 8th.

Sanderson added further birdies at the 11th and 12th to sit an incredible eight under for his first 12 holes, before six solid pars followed for the new course low on 30 July.

The haar rolled in for his back nine and David had trouble seeing pins for about the last six holes, but it failed to derail his magnificent effort.