A team from Brora Golf Club have won the Northern Counties Cup for the first time since 1985 and only for the third time in their history.

The quartet of James Macbeath, Chippie Mailley, Ross Naismith and James Ross recently triumphed at Peterhead to write their names in the record books.

The Northern Counties Cup has been staged in the Highlands since 1900 with Brora’s only other success coming in 1977. 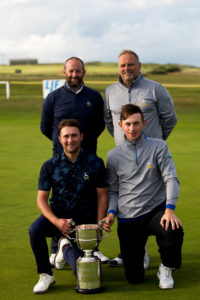 It also continued an extraordinary summer of golf for Mailley, who retained the Carnegie Shield at Royal Dornoch in August and has remarkably won every club event he has entered this year.

In a closely-contested final, both Brora teams produced a late birdie blitz to triumph by just one hole overall.

Tony Gill, General Manager at Brora GC, was thrilled at the success – especially as he recently announced he will be retiring from his own role.

Gill said: “I wouldn’t say the guys travelled confidently given the standard of the competition and our history in the event, so it’s a wonderful achievement by the team.

“We are really proud of the guys as clearly this type of success hasn’t happened often. It’s absolutely brilliant for them – and for the club.”