Home / News / At Home in the Highlands: Q&A with Rob Maclean

As a freelancer sports broadcaster and writer, primarily with the BBC covering football, Rob Maclean is a familiar face and voice on our TV screens and over the radio airwaves.

He’s come a long way since growing up in Invergordon, when the golf course was a regular haunt. Now found on the links of Irvine Bogside or nearer to home at Buchanan Castle, Rob enjoys returning to the north with his clubs when he can, with Brora high on his favourite list.

In an exclusive Q&A, we caught up with Rob to talk golf, Brora and his sports career.

Rob, when did you first get into golf?

“As soon as I was walking, I was probably holding a golf club! We lived a matter of a few hundred yards away from the golf course at Invergordon, which was a 9-holer in those days. A lot of my leisure time was in and around the golf course. I started playing through my school days, with myself and my brother, Rod, into golf. He got down to about a 3 or 4 handicap, and I got down to about 8 and won a few things. The game seemed fairly straightforward at that stage and once I started thinking about it and analysing it, that’s when it all started going wrong! I’m off about a 12 handicap now. I’ve probably been on a golfing slide from about the age of 16!”

How much do you still enjoy the sport? 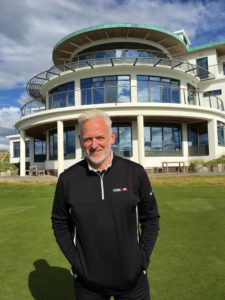 “I look upon golf now as a social pleasure, I’m not really looking to attack the course. I just love the four hours walking around, playing and enjoying the scenery. It’s a real pleasure and I’m grateful I learned the game and I can now play it forever, basically. I like the variety of playing lots of courses, no matter what reputation they have or not.”

Where else did you play in the Highlands as a youngster?

“I used to play in the Invergordon club competitions as a boy, so we would play against Tain, Fortrose & Rosemarkie and other courses nearby. I go back and play Tain whenever I can. The big course in my upbringing probably was Dornoch, as when we were young we used to have caravan holidays in either Dornoch or Embo next door. My mum would do her stuff during the day and my dad, brother and I would play 36 holes. Looking back now, I feel privileged to have had that chance, as it’s one of my favourite courses, along with Castle Stuart. Royal Dornoch has such a rich history, with 400 years of golf celebrated recently, with Castle Stuart obviously a more modern venue.”

With Brora a favourite too?

“You can see through the electric fences and the cattle and appreciate what a great golf course it is. It’s a James Braid design, and it’s a bit special. I played at Brora three or four years ago with Graeme Bennett, the former director of football at Inverness Caledonian Thistle. Graeme is a member at Brora and he took me up to play. Without doubt, it’s the strongest wind I’ve ever played golf in, but the cocktail of the gales, cows and electric fences made it seem a little crazy, but it was probably one of the most enjoyable days of golf I’ve ever had. I was able to appreciate just how good a golf course it is. If Brora is not on your to-play list, then it probably should be.”

Highland golf has really developed over the last decade or so.

“There are loads of courses in the north that I’ve not yet even played, even though I come from there. There is fantastic golf to be found wherever you look. I’m a really proud Highlander and it makes me really happy when I hear about people raving about courses in the north.”

Do you go back to the Highlands often?

“With my brother, we tend to make a regular pilgrimage up north and play a few courses in a few days, like Tain, Dornoch, Nairn, Castle Stuart and maybe Brora will break into our regular venues. It’s a great meet up for us and a good excuse for us to be back in the Highlands, going down memory lane as well as playing Highland golf. For me, there is no better thing in Scotland than Highland golf.”

You formerly fronted a BBC Radio Scotland golf show. Do you still do some golf media work?

“I really enjoy the on-course golf stuff. I do a few corporate commentaries on-course jobs in the course of a year. The last few years, I’ve done a couple in the Middle East and at The Open, alongside John Hawksworth, and that’s really enjoyable. I love being out on the course and golf broadcasting.”

What is an average working week for Rob MacLean?

“A lot of football work is crammed into the weekend. Over the weekend, I would normally do a couple of radio commentaries, a TV commentary and I’m involved in putting together a highlights show. I also write my Team of the Weekend on the BBC website on a Monday. It’s crammed in, and there can be midweek games as well, together with some other non-football work I do through the week. My weekend is probably like the week itself for most people!”

Finally, what is your biggest sporting career highlight?

“Either commentating for local radio on Aberdeen beating Real Madrid in the European Cup Winners’ Cup in 1983, or commentating on Scotland versus Brazil at the opening of the 1998 World Cup in France. Those two were a bit special. But there have been many highlights – I’m so lucky to have been in some great places at great sporting events.”

Thanks Rob, see you back in the north with your clubs soon!